skip to main | skip to sidebar

Gac: a Fruit from Heaven 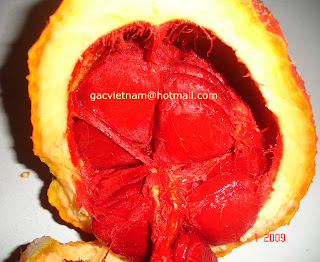 There is evidence that the intake of lycopene may positively impact chronic health concerns that are important to women. These include breast cancer, ovarian cancer, cervical cancer, cardiovascular disease, and vision.

Intake of dietary lycopene may also play a role in the prevention of ovarian and cervical cancers. An estimated 23,300 cases of ovarian cancer and 13,000 cases of cervical cancer are expected in the U.S. in 2002 (1). From a population-based study of 549 cases of ovarian cancer and 516 controls, researchers estimated consumption of several antioxidant vitamins and carotenoids including lycopene. Intake of lycopene was significantly and inversely associated with risk for ovarian cancer, predominately in postmenopausal women. The foods most strongly associated with a decreased risk for ovarian cancer were raw carrots and tomato sauce (6). In a study involving 147 confirmed cervical cancer patients and 191 non-cancerous subjects (7), only lycopene was found to be significantly lower in cancerous patients. In another study of non-Hispanic, black women, those women with higher levels of lycopene in the blood were found to have a decreased risk (by 33%) of developing cervical cancer (8).

Cardiovascular disease is the number one killer of women in the United States. According to the American Heart Association (9), over 32 million American women have one or more types of cardiovascular disease. Studies have indicated that consuming tomatoes and tomato products containing lycopene reduce the risk for cardiovascular disease. Lycopene intake has also been found to be associated with a lower risk of myocardial infarction (10). In a study of participants from 10 European countries, it was found that consumption of lycopene in fruits and vegetables might reduce the likelihood of developing heart disease (11). In a recent report from the 2002 American College of Cardiology annual meeting, blood samples from nearly 500 women participating in the Women's Health Study were analyzed. Researchers found that women with the highest levels of plasma lycopene had a 33 percent lower risk of developing cardiovascular disease than those with the lowest blood levels (12).

Maintaining healthy vision as people age is an important factor in maintaining their independence. According to the National Eye Institute, over half of all Americans age 65 and older are afflicted with cataracts (13). In one cross-sectional survey of 372 women and women aged 66 to 75 years in Sheffield, England, the risk of cortical cataract was lowest in participants with the highest plasma concentrations of lycopene. The researchers noted the findings suggest that a diet rich in carotenoids may protect against cataract development. This conclusion was based on observational data. Human, randomized controlled trials should be conducted to verify the results (14).

Antioxidants have been suggested to play a role in preeclampsia. In one study, placental tissue, maternal serum, and umbilical cord venous blood levels of four dietary carotenoids (including lycopene) were compared in 22 normal pregnant women and 19 women with preeclampsia. Levels of beta-carotene, canthaxanthin, and lycopene in placentas in preeclamptic women were lower than from those with a normal pregnancy, as were beta-carotene and lycopene levels of maternal serum. These findings suggest that oxidative stress or dietary antioxidants may affect preeclampsia (15).

In conclusion, lycopene, as an antioxidant, reduces oxidative stress. It may play an important role in many health concerns for women. These include breast cancer, cervical cancer, cardiovascular disease, and preeclampsia. In addition, serum lycopene levels in women also appear to be positively correlated with longevity. It is therefore advisable for women to regularly include a food source of lycopene in their diets.

Gac Fruits
Hanoi, Vietnam
GấcVietNam.com.vn is a Gấc fruit cultivation company in Vietnam. Our combination of the traditional experiences with new bio-fertilizer on Gấc fruit cultivation will provide organic Gấc fruit at high quality for the Asian, European and American market. GấcVietNam.com.vn provides excellent product quality to achieve customer’s satisfaction. We have our own Gấc fruit farms and contract farming up to 700 ha. We can supply Gấc Fruit Puree, Pure Gấc Oil, Pure Gấc Oil Softgel Capsule and Gấc Fruit Powder. If you are interested in our products please do not hesitate to contact us via email: gacfruits@gmail.com / Website: www.gacvietnam.com.vn/ tel: +84-908 99 88 66